Introduction to ‘Parliament Must Die’ 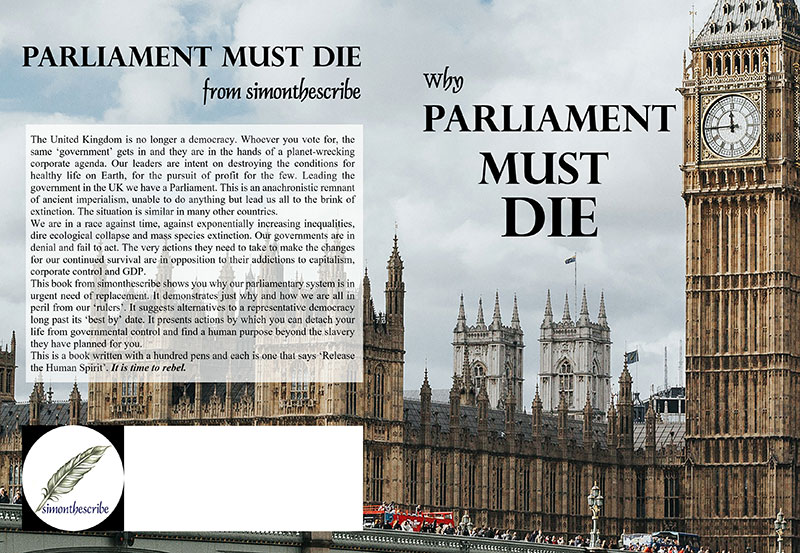 ‘Parliament Must Die’ is a book about changing our model of government from representative democracy  to participatory democracy. This book gives a case for why it needs to happen urgently. It describes how it could happen and what you can do to help bring it about – if you consider such a thing desirable – and this book aims to persuade you of such.

Parliament is an anachronism way past it’s ‘best by’ date. The technology is here now for us all to have a say if we wish. True democracy comes directly from the people and we no longer need representation on national policies.

‘Parliament Must Die’ is a plea for you to think, to really think whether we need this endless stream of self-interested politicians (mostly) called ‘Parliament’. Either party ‘left or right’  seek to dominate every single aspect of our personal choices through capitalism. They often mis-represent what we think or believe, do or dream whilst many of them ‘line their own nests’ at the same time in a chumocracy? ‘Parliament Must Die’ is a cry for personal liberation to allow us to evolve as human beings. It is a rebellion to over-rule. It is a recognition that many of us have capacity for taking personal responsibility regarding our own lives.

Capitalism has failed along with its system of ‘representative democracy’ whose proponents represent the interests of a planet-raping economy over people. Successive government’s single-mindedness to support capitalism has taken our environment – our ability to sustain the conditions for life on earth – to the edge of a precipice. Nature has now come in to bat and refuses to co-operate with her own destruction.

The influence of human activity on Planet Earth has started the Sixth Mass Extinction and this includes us humans. Like any sensible person I would prefer the journey of our culture to ‘a new way of relating to the earth’, to be a gradual transition in which as few people suffer as possible. But it is already too late for this.

I am not going to make any apologies here about the large number of quotations and extractions contained in this book. This is a book ‘written with a hundred pens’. It is not an academic paper. I am not going to re-word what people much cleverer than me have already written in order to claim it as my own.

My role as writer/compiler of ‘Parliament Must Die’ is to integrate the pre-existing ideas contained within into a cohesive and structured argument to help you, the reader, see what is going on. To see what is being hidden in front of your face. It is here to help you decide what level of involvement you will take in creating a future that might work for us all.